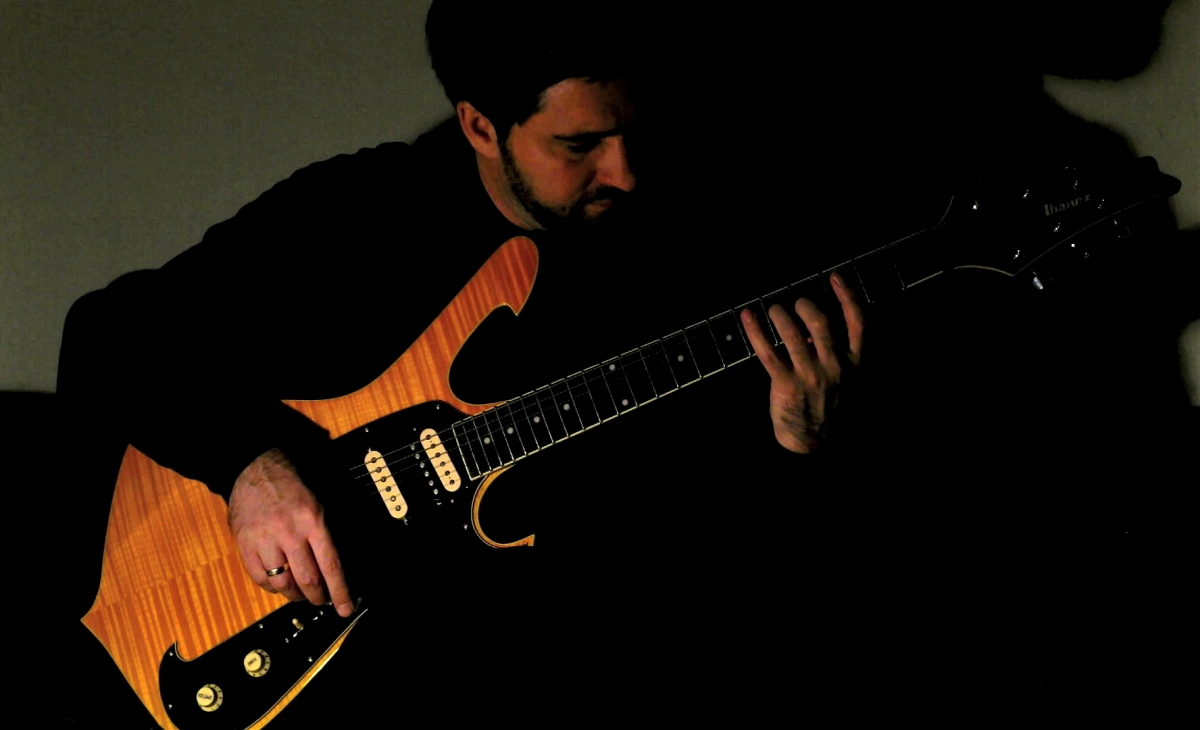 With my new guitar – an amazing Ibanez FRM25-MF – did begin a new stage for composition in April 2019 with the series »Paeans of Grace«. Due to this new series I did a »revival« of my first guitar, a Fender Stratocaster Japan and initially I did also finally re-purchase my Hohner »The Prinz«. See images and background to the guitars below. Last extensive series of instrumental compositions for guitar dates back over 20 years ago to 1999 with the recording of the Praeludien und Ricercare and other compositions for classical guitar. Another new stage for playing and recording guitar opened up with my Mesa Boogie Lone Star, see also under »gear«. Below beginnings of a new series of songs, all sound-layers recorded (partly) live with my Boss RC-300 loop station:

Ibanez FRM25-MF – The amazing basic shape of this Ibanez guitar model has been the very first genuin Ibanez shape, done by a japanese craftman in 1975. The first series with this shape has been initially labelled as »Artist 2663«. The model has been soon re-labelled as a signature model, in the original Iceman and later appearing as my »reversed« Fireman version, developed by Ibanez with Paul Gilbert 2014 as the FRM25-MF. My enthusiasm for this guitar, particularly regarding the unique formal quality of the shape, refers basically to the japanese origin. Guess one can envision a relation to japanese sensibility for shape based on calligraphical practice.

The Ibanez FRM25-MF is an anniversary model, referring to the 25 year colaboration with the guitar virtuoso Paul Gilbert. Initially crafted – due to several online sources – in a limited edition of reportedly 15 instruments at Sugi custom, Japan. Sugi was founded in 2002 by Makoto »Nick« Sugimoto. Prior to founding Sugi, Sugimoto had worked for many years as head of R&D at FujiGen Gakki, the renowned guitar manufacturing company. Anyway, apart from the original development and manufacturing origins of the guitar, the model has been solely offered in 2014.

My very first E-guitar, revived 2019 with a beautiful new pick-guard and strap.

This Hohner guitar model has been my second E-guitar I bought in my youth. Based on my deep admiration for Prince Roger Nelson I did have the occasion to get one. Due to my classical technique and the kind of compositions I did play I did use my Washburn with accoustic strings these days on stage. I felt bad that the Hohner was not in use so much so I did sell it to a friend. One of the biggest mistakes, I realized soon and increasingly for several reasons. Finally, I did get another one 2019, soon after this relieve my Ibanez FRM25-MF. Prince did play this model sometimes even with the »Hohner« logo from the first series (model also available as »Anderson Mad Cat«, Anderson and Hohner did colaborate), for instance at the »dirty mind« tour, 1981. Some of my favourite Prince songs are from this tearly days. The model »Hohner The Prinz« is the second series labelled by Hohner, my model's series number dates 1987.

I did test a considerably wide range of possible amps with my Ibanez FRM25-MF and I have been blown away during proximate, meticulous comparison by the outstanding, magical sound of the first Mesa Boogie I did play. I also did test various cabinet brands, types and detail configurations, like speaker types, front / rear mounted, open / closed back. I finally decided to choose the Mesa Boogie 2x12 Recto® Vertical Slant Cabinet with closed back for various reasons.

With the Shallow Water I did find a considerably subtle (if used in this way), yet indispensable, magically musical tonal aura device, that transforms the sound in an enigmatic (through random modulation flow), unintrusive, yet peerlessly enchanting way, providing a warm and dark tonal opulence – used particularly for my clean sound for instrumental compositions. Other realms for using the Shalloe Water open up through its more radical setting options, particularly through the reactive LPG envelope for songs that demand deliberately obvious and weird sound manipulation.

»The Fairfield Circuitry Shallow Water is a subtle effect. Significant tweaking can get you close to more traditional, effected modulation and chorus tones, but that’s not really what the Shallow Water is about. The subtler shades of the Shallow Water are sometimes more felt than heard (something I can’t say about most modulation effects) and there were times that I forgot it was on until I turned it off and noticed my tone was less sweet.« (...) »The Fairfield Circuits Shallow Water is something rare in the effects world… a truly new effect. On paper, it reads like the Chase Bliss Warped Vinyl or even the Cooper FX Generation Loss, but between the truly random modulation flow and reactive LPG it is entirely its own beast. I found it to be the rare modulation effect that I could imagine always leaving on, but that would of course lessen the magic of having it stand out when it is used. If you are looking for warm, analog lo-fi vibe to add to your sound, or even just a different type of tone thickening, the Fairfield Circuits Shallow Water is a top contender to get you there.« Chris Loeffler, review excerpts

In music, detail matters. Precise performance requires the best gear you can get, a fine instrument deserves dazzling company.

to this
bleakness
antithetical

In love
dear love, my love
detail is all

As a »person who writes« (Thomas Bernhard), I feel the need to quote the whole poem, actually one of my few favourite texts.