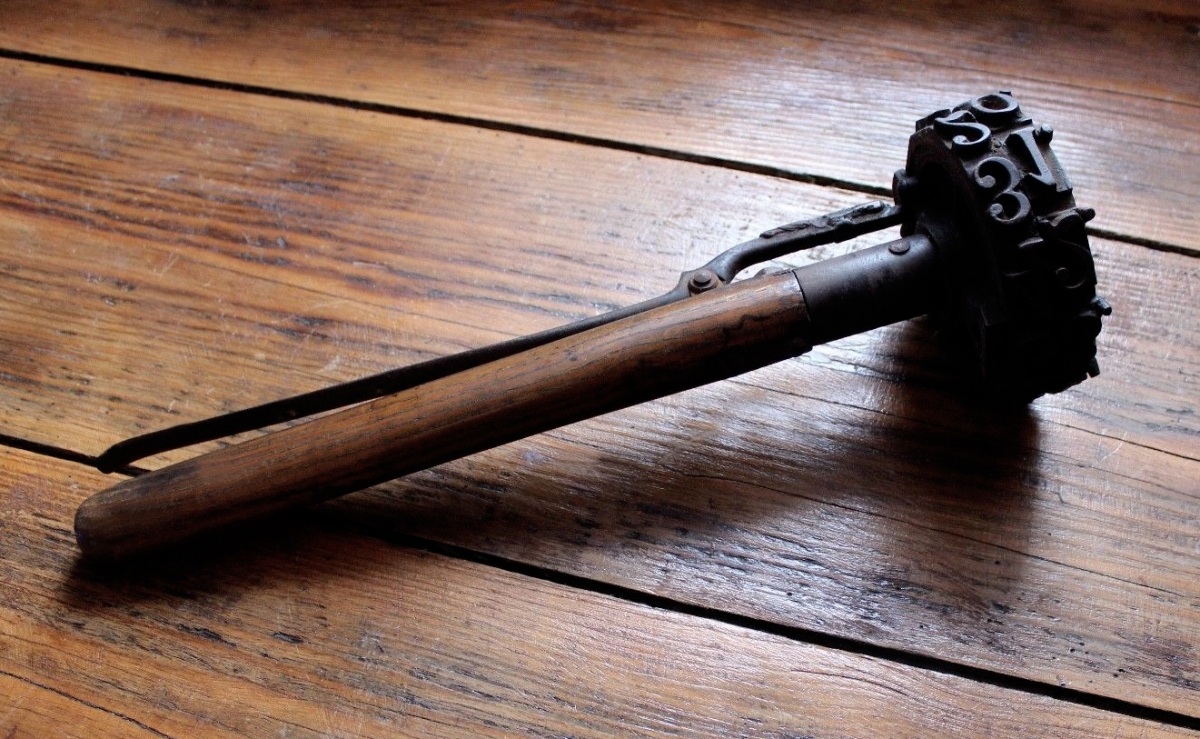 The act of »marking«, exemplifying the imposing of abstract entities upon reality is confronted with the concrete, bodily and sensual act of marking and the concrete formal quality of the marks. The marks will be performed with a marking tool formerly used in forestry to mark trees, around 1865-1890. The series embrace various applications of marking, regarding numbers, dates, codes, time, trees.

The metaphorically and literally violent aspects of marking are opposed to the powerful phenomenons and the beauty of human movement and the concrete formal structure of the marks, respectively prints of the marks on paper. The performances will be visualised from case to case on video, sound will matter also in particular series.

Series #1: marking numbers
The act of counting will be executed in contradictory ways to express particularly the problem of »following a rule«, like formulated particularly by Wittgenstein (see also references). Beside various other aspects, the investigations exemplify the basic ontological distinction between type and token, the relations and differences between the status of an abstract entity, the type and its concrete instantiation, the token, though this distinction is merely one aspect of the investigation as one facet and reference point to explore the more complex and ambiguous entanglements.

Series #2: marking dates
On a daily base there will be marked the dates on one single piece of wood. Every day, there will be made a wood print of the result. The structure of the super-imposed marks, inducing an increasing obliteration will be from central interest from a formal and conceptual perspective.

Series #3: marking time
Related to the »marking dates« series, there will be a series with marked time.

Series #4: marking nature
Related to the original use of the marking tool in forestry to mark trees, the violent confrontation between nature and culture will be expressed in a specific way. One possibility to execute this series will be the marking of 99 trees as an intervention. One particular aspects in this series is the reflection about the vanishing of professions, craft and tools. Another crucial aspect here is the execution of repetitive action and movement with its specific quality and implications regarding human practice and self-development as an exemplary case.

One first occurence of ambiguity can be experienced regarding the »zero« as a »numerical digit« in the first range, opposed to the »zero« in the second range as a blank position before the »cardinal numbers« (counting the digital units in the first range) and furthermore at the end of the range, the functional shifts of »zero« as a position of the number »10«, or »100« or »1001«. When counting reaches the »10« in the lower range, you will also see the number »10« above in the first range, inevitably, but the »0« in the first range is simultaneously still the »0« of the next digital unit »01«. One very subtle irritation is build in regarding the counting modus in range two: In usual counting the »zero blank space« would disappear, when the »10« is reached, you would write: 01, 02, (...), 10, and not »010«. The last »01« in the lower range could be continued as »11« or might start again with counting »01«, »02«, (...).

The phenomenon of ambiguity can be compared to examples like the »Necker Cube«. Regarding the phenomenon see my Master Thesis on Pictorial Ambiguity and the study watch.

mark #0: marking zero
One special singular piece will be the marking of the number »zero«. Expressing in a considerably radical, simple and exemplary way the contradiction between the ontology of abstract entities and the concrete act of marking »something« meaning »nothing«. One variation will be a triptych with three »zeros«, pointing at the subtle differences between the acts and results of marking the three »nothings«.

The series is part of my ongoing work on »figures in movement«, investigating the entanglements between concrete, bodily movements and movements on a conceptual level.

Above: nicolas constantin: three strokes triptych (1999).
marks is – beside many other aspects regarding the bodily action – particularly related to my education in formal and free calligraphy, my Budo practice (Dento Iwama Ryu Aikido) and my carpenter apprenticeship.

Above: nicolas constantin, Schreinerarbeit (Intarsie, Nuß, Ahorn) 1995, 40,5 x 40,5 cm/ carpenter intarsia work. My carpenter apprenticeship (1995-1998) has been a seminal experience. The approach of unpretentious, precise and careful craft, appreciating the cunjunction between material quality, tools, working process and form is an exemplary demand for me, regarding the working process, work quality and personal attitude. Crucial point is the fundamental difference between immediate experience and painstaking, systematic work on the one hand, and the relation between long-term practice and investigation and the specific kind of (sensual) experience, understanding and deep gratification one gains from it, on the other hand. From the perspective of my work on »figures in movement«, the relation between craft and the crafted game as a space for human movement and interaction is from particular interest.

Above: Muybridge, Eadweard: Carpenter Cleaving with Hatchet and Hammering, Plate 84, The Human Figure in Motion (1887)

Above: nicolas constantin: performance of Mel Bochner's »Five Sculptures«. During my course Experimentieren als Lebensform, University of Applied Sciences, Augsburg, Faculty of Gestaltung, 2013. At the project page more information and images from the course and also pictures of a field trip with my students to the show If the Color Changes, Haus der Kunst, Munich, 2013.

Above: Mel Bochner: Five Sculptures, 1971
The specific series #1 »marking numbers« is also meant as a homage to Wittgenstein and Mel Bochner, particularly his »Counting Alternatives – The Wittgenstein Illustrations« (1971). A rare case of reference to Philosophy in this direct way and to another artist. I would like to stress that my work is not meant to be understood as an »illustration« of Philosophy. Sometimes the works might metaphorically exemplify problems that bear philosophical relevance. Regarding Mel Bochner and Wittgenstein see the fine publication: Thomas E. Wartenberg: Mel Bochner – Illustrating Philosophy, 2015, Mount Holyoke College Art Museum, University Press of New England. Very fine also the edition from Arion Press: On Certainty – Über Gewißheit by Ludwig Wittgenstein, with an introduction by Arthur Danto and twelve relief prints by Mel Bochner, 1991