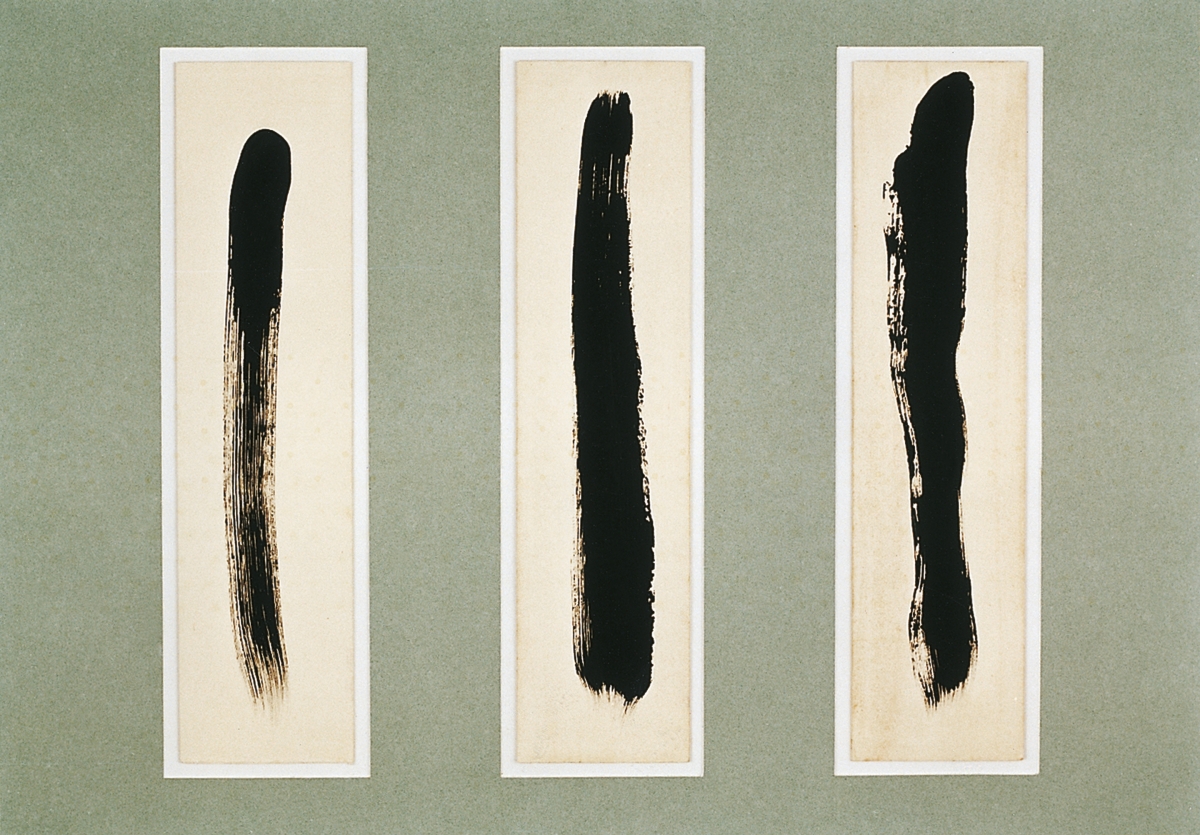 My calligraphical studies, particularly three strokes, have been a seminal experience for the development of my work, based on the view that the core aspect of calligraphy is the visualization of human movement.

Through my calligraphical practice, movement entered the image in a literally embodied way. Furthermore, the aspect of indeterminacy has been exemplified for the first time. The significance of three strokes regarding my working approach can be pointed out in an insightful way particularly through a comparison of three strokes and Duchamp's 3 stoppages (more here: references). The combination of the aspects movement and indeterminacy unfolded extensively through Variations IX, 15 years after »three strokes«. From my point of view, the correlation between the development initiated through »three strokes« and »Variations IX« is a crucial one.

Studying formal aspects through observation, understanding and bodily experience in formal calligraphy (always without any templates) combined with experimental practice in free calligraphy have been eminently important experiences for me and my work.

Above: One of my specific core interests regarding calligraphy has been the investigation in formal structures. Beyond and based on the painstakingly process of developing an understanding of the different styles through writing practice (important to note: always without any templates, only with notes and sketches done during the course, see examples below) I have been working on an analysis of formal aspects, like »modulation«, »variation«, alternative«, »development«, »comparison«, »classification«. The insights in the evolvement of formal structures and the training of a sense for coherence regarding formal phenomenons has been from greatest value, transfering these experiences to my work approach beyond calligraphy.

Below: the aspects shown above with single characters have been investigated through the studies below.

Above: »modulation«. From »Karolinger Minuskel« to »Gotische Kurrent«. Very interesting transformation, see longer samples and text below the formal studies.

Above: »variation«. Some variations of the »Rundgotisch«.

Above: »development«. From »Unziale« to »Fraktur«.

Below: Original chart I did develop during my studies. I would not use the particular colors these days but it has some charm as an autobiographical document.

Above: »Fraktur«
Below: Original chart to compare formal structures.

The investigations particularly in formal coherence have been the base for a transformation to free calligraphy. Below two calligraphical studies in movement, composition and coherence:

To visualize correlations between aikido and calligraphy regarding movement and form I once did do this little study. Also meant in a quite humorous way as a homage by keeping the original drum sound of the source video.

I did start to practise calligraphy and aikido fairly at the same time, around 1998. Regarding the correlations between calligraphy and aikido I have been particularly fascinated in the beginning by the work of Kazuaki Tanahashi, a japanese calligrapher, who is also practising aikido. He even trained with the aikido founder Morihei Ueshiba. A fine documentary about Tanahashi you can find here: The Brush Mind – Kazuaki Tanahashi

three strokes is also a homage to John Cage and Marcel Duchamp, particularly to Duchamp's 3 Stoppages, regarding the seminal role for the development of Duchamp's approach and generally regarding the use of chance operations. I have been involved with John Cage's work at that time already, but I learned about Duchamp's 3 stoppages after I did do the three strokes. Later on, I discovered more and more the connections between Cage, Duchamp and particularly between the 3 stoppages and 4'33''. My subtitle, given at that time quite humorously – not wanting to / say anything about – is a homage to Cage's »not wanting to say anything about marcel« (see here: John Cage plexigrams). I do owe John Cage eminent, insightful inspiration, regarding my practice and also my adoration for aikido related issues. One particular inspiration has been the book For the Birds / Interviews with John Cage. My use of chance operations in the 9 channel version of atlas and in Variations IX is based on his inspiration. Furthermore Variations IX is a homage to Cage's Variations V – my decision for the title is also based in an also quite humble and humorous sense on the fact, that Variations V has been done 50 years before Variations IX (1965 / 2015).

»It is a joke about the meter, Duchamp glibly noted about this piece, but his premise for it reads like a theorem: If a straight horizontal thread one meter long falls from a height of one meter onto a horizontal plane twisting as it pleases[it] creates a new image of the unit of length. Duchamp dropped three threads one meter long from the height of one meter onto three stretched canvases. The threads were then adhered to the canvases to preserve the random curves they assumed upon landing. The canvases were cut along the threads' profiles, creating a template of their curves creating new units of measure that retain the length of the meter but undermine its rational basis.« Gallery label from 2006

»To a large degree, 4’33” and the works preceding it were inspired by Duchamp, in particular by his employment of »chance operations« as championed in his 3 Standard Stoppages. In constructing this piece, Duchamp dropped three meter–long pieces of thread onto a canvas, letting them fall as they may, then cut their variable silhouettes to display the inherent indeterminacy of life, even in so–called standardized measurements. Speaking about the influence of his friend and mentor, Cage noted: I always admired [Duchamp's] work, and once I got involved with chance operations, I realized he had been involved with them, not only in art but also in music, fifty years before I was. When I pointed this out to him, Marcel said, 'I suppose I was fifty years ahead of my time.« Gallery label from There Will Never Be Silence: Scoring John Cage’s 4’33”, October 12, 2013–June 22, 2014

Of course I do not compare »three strokes« and »Stoppages« from an art historical perspective, no intention at all is directed on any value discussion. My perspective is solely focused on considerations about the significance of seminal works for the development of the approach an artist holds. For Duchamp, his »Stoppages« have been a crucial work regarding his approach of developing a »non-retinal« art. Another crucial work, aiming at this direction, has been Duchamp's »Nude descending a Staircase«. »Stoppages« includes also, through the use of chance and indeterminacy, kind of a depersonalisation of the line. This »non-retinal« and depersonalisized approach has been slightly ironically commented by Gerhard Richter's »Ema«. In contrast to Duchamp's »Nude descending«, Richter focuses again on a sensual art, including again the individual figure and body. In this context my considerations about »three strokes« should be also seen as an appreciation of Duchamp's work, and the re-personalisation of the lines in »three strokes« correlates to the re-sensualisation in Richter's »Ema«.

Inspired through this considerations and correlated to my ongoing investigations in movement, particularly related to my plan to do portraits of »a girl walking«, I did this portrait of my Beloved: girl descending a staircase. The decision to do a rare exception through refering quite directly to other works originated finally through an amazingly beautiful coincidence regarding the color and light situation of our home's staircase.

My calligraphical practice is also related to the way I did move the camera (means: my hand, my arm, my body) in many videos of the atlas series, e.g. the way the camera is moved against the cage bars in cage: