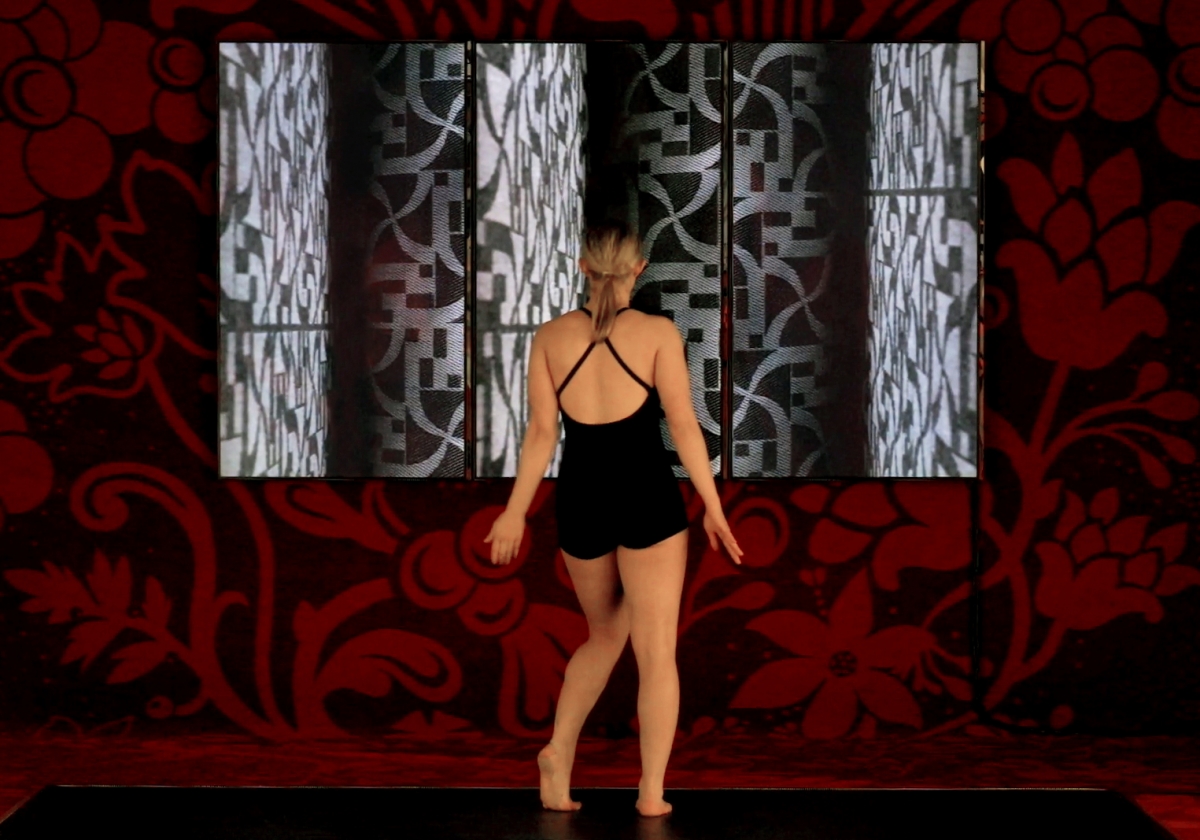 »Nicolas Constantin’s interactive composition investigates formative patterns that emerge in the interplay of humans with the omnipresent media of today. In dance-like fashion, ›Variations IX‹ open up an experimental space to explore both personal freedom and the interdependency of mediated activity.«

»Like Cage, Constantin charts and fathoms the conditions of media spaces. All too often, such spaces prescribe certain patterns of behavior. In order to achieve the individual freedom of personal movement, these patterns need to be broken up.« Murr, K. Borromäus about Variations IX in: [ ]

Videos
Recommendation: watch the 4 videos (also) simultaneously for an insightful comparison of the different performances regarding movement, visuals and sound – for a complex polyphonic experience. The first video is a rather prosaic demonstration of the three phases.

Above: performance (free improvisation without rehearsals) from Jennifer Leemann. Asking Jennifer for her improvisation has been inspired by watching spontaneous performcances from dancers from the Iwanson International School of Contemporary Dance munich, during an evening event at the show. Below some videostills from that evening. Important to note that Variations IX provides an experimental space for every visitor to perform the piece, dancers included. Variations IX offers an invitation for spontaneous, random improvisation and performance, therefore there has been no choreography or rehearsal particularly for the performance of Jennifer Leemann. In this sense, the performance is an expression, also a genuine portrait of her as a person in spontaneous movement, and – deliberately – not merely a choreographed dance piece, because this would not have been the approach of the installation.

The first visual artist I have been consciously aware of and who fascinated me for a long time solely has been Francis Bacon (see some more notes on this early influence regarding the series »two figures«, particularly regarding stroke / sirens). The decision to use a monitor triptych in Variations IX originated to an essential part in my admiration for Bacon's triptychs. What I do like particularly in Bacon's work are his »turning figures«. One of my favourite triptychs is the one from march 1974, with its »turning figure« in the middle panel and the »observer« in the right panel (see below). For me this triptych expresses beautifully two of the main topics I am interested in my work: »movement« and »observation of movement«. What I did like about the spontaneous improvisation of one dancer of the Iwanson school, has been his expressive movements, powerful and fragile at once. The expression of a powerful fragility is also a central quality of Bacon's figures, being exposed to caducity. In a beautiful way, one scene from this evening, with two visitors coincidentally situated at the two sides of the dancer, reminds me of Bacon's triptych and a comparison might be an insightful remark or possibly even a crucial clue to get a deeper understanding of the extensive approach of Variations IX . On the first, superficial sight, the spontaneous movements of the visitors in the show might seem quite far away from the dark expression of Bacon's work (beside the point that Variations IX investigates various aspects that of course have little to do with Francis Bacon. Somehow one could say regarding specific aspects my early Bacon admiration here meets my late John Cage influence, in some respect). But for me, on a quite subtle level, the expression of anxiety and despair in Bacon's work has been present in the alarming reservation of many visitors to move unbiasedly, being inhibited in a subliminal, but powerful way. Only some children seemed to be free from these bonds of self-consciousness. In a subtle, but nonetheless crucial sense, Variations IX has been also about the anxieties of people to move freely, being exposed to their (social) environment, choosing rather to be a voyeuristic observer or an uninvolved figure. In both cases or for comparable reasons, the crucial point is the restraint to engage in a situation, the timidity to move, the inability to – simply – act.

Above: Francis Bacon, triptych, march 1974
Below: One crucial aspect of Variations IX have been the two possible basic forms of involvement for the museum visitors: you could become a performer or an observer. Observation bears also aspects of voyerism. An extreme example of voyeurism did happen at an evening event with various dancers. One woman did take pictures with her smartphone from one dancer without any signs of decency or any sense of shame. The observation of the relationships between the performers and the observers has been a crucial part of my investigation in »figures in movement«.

Below: another more expressive performance has been the one of Phyllis Josephine (see video nr. 4), including her »turning figures« (videostill).

Below: dancer, abandoning herself impressively to the white noise / glitch phase and to the final black screens.

Below: in comparison another dancer (Jennifer Leemann) in the white noise / glitch phase and confronted with the final black screens – self-reflection. She has been performing more reserved throughout the three parts and has been reacting quite differently to the third and most disturbing phase of the installation. In any case, every performance and every single movement do embody their own beauty and value – one crucial aspect and insight to gain regarding the approach of Variations IX.

Above: The »self-reflection final is a subliminal, yet crucial reference to my first selfportrait, Selbstbildnis, done 1992 in Paris, see notes on the page of the work.
Below: another seminal inspiration for my investigations in movement has been the work of Bruce Nauman. In this context, Nauman's interest in the developments in dance have been from great impact. Nauman he has been aware of the work of Merce Cunningham including the relation to John Cage. My first confrontation with the work of Nauman has been in the amazing show CTRL SPACE – Rhetorics of Surveillance from Bentham to Big Brother at ZKM, Karlsruhe, experiencing his »Live-Taped Video Corridor«. I also have been immensely fascinated by Dan Graham's »Time Delay Room« (see chapter about Graham in my Master Thesis Pictorial Ambiguity). Bruce Nauman's studio performances from the seventies like »Bouncing in the Corner« or »Walking in an Exaggerated Manner Around the Perimeter of a Square« have been from great importance for my work.

Below: performing together with my beloved son, moving joy.

»From afar, the experimental setup presents three large screens displaying abstract patterns. As the spectator approaches these patterns, he activates a sensory floor connected to the monitors. In this way, he inadvertently triggers the connection to the media action, which is linked to a stomping sound. Soon, the abstract patterns reveal themselves as video recorded detail shots of a running power loom, which is also the source of the rhythmic sounds. During the course of the interactive installation, the subject experiences various stages in a medial interplay of freedom and dependency. By and by, images and sounds develop a dynamic entirely independent of the test subject’s actions – until everything dissolves in a grand finale of white noise. Suddenly, the spectator finds himself reflected in the black surface of the now switched-off screens. So, after all other strategies of behavioral patterns have evidently failed, the spectator is thrown back upon himself and himself alone in this literal act of self-reflection.«

Variations IX has been shown at the State Textile and Industry Museum Augsburg (tim) from 22 May to 29 November 2015 as a part of »KUNST I STOFF«. tim

The show has been visited by 53.000 visitors during the 6 months from May to November.

Thanks from the heart for the »tim« team for their incredibly kind and professional support and for this wonderful opportunity. My warmest thanks also for coding work, M.B., take care. My gratitude goes also to the Future Shape team for their kind and commited services and work. A very special thanks to Hermann Krusch for providing the chance to get the central tool, my Fuji X-Pro 1 under special conditions.

Above: opening evening with my beloved.

Variations IX (2015) holds an outstanding key position regarding the evolvement of the work of Nicolas Constantin. On the one hand the installation combines in an eminently focused and elaborated way central aspects of the early works, like a cumulation of seminal efforts, regarding visual and musical composition. The work exemplifies a seminal interpretation regarding the core motif of »figures in movement«.

Beyond that the interactive audio-visual composition exemplarily opened up perspectives and problems for further investigations like an extrapolation of early enclosures through an extension of the aspects human figure, movement, observation of movement, performance / space, glitch, chance operations, indeterminacy and portraiture.

For insights regarding the portraiture motif and particularly the first seminal appearance of portraiture see Selbstbildnis, Paris 1992. See also notes to the final »black screen« / »self-reflection« phase of »Variations IX« below in the image section.

Furthermore, Variations IX is also related for the first time to the philosophical investigations of Nicolas Constantin Romanacci from a conceptual perspective. The work is also a genuine reflection on the act and structures of image making (exemplified through the three different ways of composition in the three parts of the installation, culminating in the glitched structure in the third part).

The series triptychs separate assignments (braid, re-move make-up, shape) and two figures (watch, girl's game, stroke) are continuations of core motifs of Variations IX, though – deliberately – not plain or too obviously related on the first sight. For further investigations in the motif of a »figure in movement« see also girl descending a staircase.

One of my favourite works in progress related to the motif of »figures in movement« is ball room, 2017, a participatory, performative work. Some versions are also performed as interventions. The relation between ball room and Variations IX is a crucial one:

February 2018, the approach of Variations IX evolved to the conception of a new stage of work, referring to central aspects of Variations IX, though present from the beginning, now made more obvious through a precise formulation. The wall-triptychs and ball room belong to a specific, elaborated stage of investigation. The work series cover combinations of studies in composition and performance based elements.

The investigations are long-term studies in composition, involving intervention and interaction related to spatial and social environments.

Variations IX is an investigation in movement and the observation of movement, regarding particularly the two questions: »why do we move?« and »how do we move?«.

See catalogue, press texts and details beyond the images section.