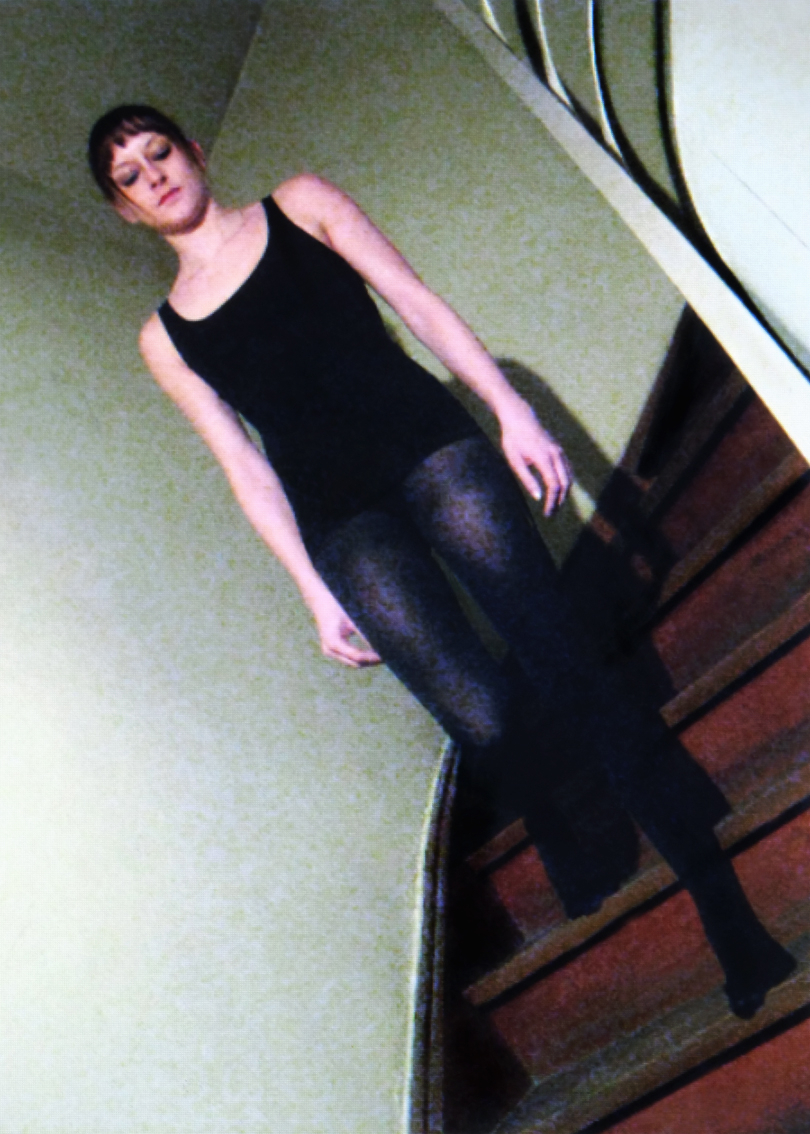 girl descending a staircase combines in an exemplary and focused way core aspects of my work: it exemplifies investigations in movement, reflections on image making, a blending of experimental processes (like the use of chance operations regarding image and sound) with rigorous composition, ambiguity regarding form and expression, and polyphonic structures.

Versions
Work in progress. The videostill version above remains deliberately within a still classical approach of composition and image making. The transformations of the original material exemplify that my work is also basically a reflection about processes and approaches of image making and in a broader sense – including the aspect sound – an investigation in processes of composition.

Glitched / Gif version
The crucial point regarding the approach and reflection on image making is the blending of the use of chance operations with the ambition to work still on a rigorous composition.

Working process: Transformation of the original video through a manipulation of every single frame, and creating several glitched copies of nearly every frame through chance operations. The manipulated and mastered images are then recomposed into a loop of moving images. The loop contains 162 single images (including 90 glitched frames), each individually manipulated, no mere video effect has been used. The 90 glitched images used for the final gif are selected from a vast amount of experiments using chance operations.

The »exposure« versions are further image transformations, turning the – already several times manipulated – Gif version again into single images. The experimental »exposure« process has been developed the first time while working on the »separate assignments« series, particularly the braid assignment, see triptych below.

The versions perform increasing stages of image manipulation and transformation and do exemplify reflections on the act of image making.

Above: Nicolas Constantin, Selfportrait with figures in movement (2017)

After the glitch/noise sound version of girl descending a staircase I did start my experiments with the Zoetrope. The name Zoetrope was composed from the Greek root words ζωή zoe,»life« and τρόπος tropos, »turning« as a transliteration of »Wheel of life«. The original name has been »Daedalum«, referring to the greek craftman and artist Daedalus, admired for his lively statues, »some with forms blocked out, others in a quite complete state in that they are already stepping forward and give promise of walking about.«

The Zoetrope experiments turn the severaly times transformed images from the digital realm again into an analog, sensual form. The motif of a figure in movement performed as a »hands-on« haptical experience. Beyond the sensual aspects, a further stage of the reflection on processes of image making.

Below: selection of the glitch manipulations. 60 from alltogether 90 glitches (whole gif contains 162 images)

References
Beside references to other artists (a rare exception regarding my work in this direct form) for a positioning in a larger context (see below), girl descending a staircase is basically and foremost embedded in my own work development, regarding my ongoing investigations in movement. The motif of a figure in movement can be beautifully traced back (through various work series) to my first genuine image, figure in movement from 1993. The motif is also a central aspect in my installation Variations IX, an interactive, audio-visual composition. For insights regarding the portraiture motif and particularly the first seminal appearance of portraiture see Selbstbildnis, Paris 1992.

Other references – rare exceptions of quite direct homages

In context with my investigations in movement and my plan to do variations on the motif of a »girl, walking«, I had been, of course, already aware of Muybridge, Duchamp and Richter for a longer time. But only after I realized the amazingly beautiful coincidence of the correlation between our home's staircase and the other versions regarding color and light, I did decide to do this version as a quite direct homage (as a very rare exception), what I would have not done without these coincidental correlations. The original light situation can be seen in the triptych above. The »videostill / screenshot« is already a transformation of the original image, including more apparently reflections on the process of image making. Beside the aspect of a homage and the variation on the motif, the reflection regarding the approach of image making is exemplified most elaboratedly in the glitched Gif version. See for references to Duchamp's »Nude descending a Staircase« and Gerhard Richter's »Ema« also my descriptions regarding triptych / calligraphy. Gerhard Richter did do two images, two versions of his wife »Ema (Nude on a Staircase)«: first version is a painting (1966, oil an canvas, 200 cm x 130 cm, WV 134), and a second version 1992, a cibachrome photography of the painting (224 cm x 150 cm, Editions-WV 80). The transformation of the original painting contains also a reflection about image making, a crucial aspect of Richter's work. Particularly, the intimate act of picturing his wife nude becomes rendered somehow into something more public through the reflexive content. In a comparable sense, I did »girl descending a staircase« deliberately and very consciously with my Beloved. Embedding this intimate, sensual and private act into an art historical context, turning a private portrait into a »motif«, into a(nother) »figure in movement«, the work is also a reflection about the tensions between intimacy and publicity, between experiencing time from an individual perspective, being simultaneously embedded in historical contexts. In comparison, the approach of the series »separate assignments« is quite contrary: by giving a complete stranger assignments via webcam that refer to quite intimate situations, like re- move make-up, or even more radically in »shape / shave« (work in progress), usually done alone or maybe observed at most by persons you know well, the tension between intimacy and distance is reversed, compared to »girl descending a staircase«.

Regarding a comparison of the approaches of Duchamp and Richter, »girl descending a staircase« could be seen as a combination of both work approaches. Duchamp created a quite depersonalised, non-sensual, »non-retinal«, exemplary work. The »non-sensual« has been a central aspect, why this work has been seen as a provocation. Gerhard Richter in turn commented on Duchamp's work through a »re-sensualisation« of the motif, a re-sensualisation of painting. »girl descending a staircase« combines both approaches, particularly in the »Glitch / Gif« version. Abstraction and a formalisation are realized through the image manipulations. On the other hand, the movements, the situation and the clothing are still deliberately sensual. The entanglement and the ambiguity of these aspects (intimacy and historicity, abstraction and sensuality) are from central interest for me in this work.